Connie and Tom sent me this email about their Tappan Deluxe...


"We are looking for an age for our Tappan Deluxe. HDV 64 -3 Serial number  254710.  My husband grabbed this almost 20 years ago  “free for taking”.  It is my prized possession…I absolutely love it!  We we’re so happy to find your blog…we have searched for years for info On these old stoves! Thanks for any input you can give us!"

The things I noticed about the stove: The model is a later version of the Deluxe...early 1950's. Probably '52 - '54. The broiler foot pedal was a later option. The stove has Telechron clock which is a little unusual for the later models which seems to have the time control clock. The clock also has chrome knobs...which is a nice feature :) It's also a little unusual for this model to be a non-CP (without a standing pilot). These later stoves seems to almost be made to order because there is so much variance in the features. The stove has those very nice chrome burner knob backs...those are special!

Connie and I exchanged a few emails about her oven not working properly. We originally discussed the possibility that their thermostat needed work, and then I received this update:


"Just wanted to let you know… I told you our Tappan oven was not working….not getting hot. We had the oven pulled out, so we took everything apart, Tom wanted To make sure that is was the oven control before we sent it away to be rebuilt. After taking the burners completely out and cleaning them, they did not work right either! If you got one burner lit, and lit another, the first one would go out! So Tom checked the gas line, low pressure! He went down and tried to light the hot water tank… It had low gas pressure. We called the gas company. Our meter was broke, they replaced it. While we have the “old girl” pulled out he is replacing the flexible gas line, then I should be BAKING Christmas cookies!!"

A good reminder to start with the basics when addressing stove problems. And, yes, I am that far behind in posting reader's stove pictures (those Christmas cookies she baked are long gone, I am sure).  Be patient, I have many more reader's stoves to share.... 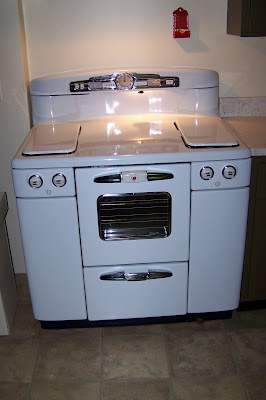 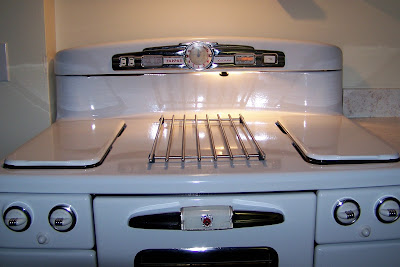 As I started working on restoring my vintage Tappan Deluxe stove, I realized that the resources online for vintage Tappan owners were very limited. There really was no place for Tappan Deluxe owners to exchange information and talk about their stove.
So, one day I decided to set up a page on my blog devoted to Tappan Deluxe stoves.
My plan is to set up a series of posts where visitors can exchange information via Comments. I may initially just set up a series of posts with photos under different topics. People can then comment under different topics.
Please feel free to let me know if you would like me to start a particular topic. Please be patient as I work to get set this blog page up and running.
I hope to include photos of visitor's stoves too....so, get those photos ready!
Welcome! I hope you join in on the conversation.....

How To Join The Conversation

Do you have a question about your Tappan stove? I have started a specific thread for questions and answers. Please join in the conversation. The more info. people share, the more we all know about our vintage stoves.

Please read the comments before asking where you can buy an owners manual, where to buy parts, etc. These questions have been covered in detail.
Questions and Answers
I do not give estimates on what stoves are worth and I won't try to guess. I paid $100 for my stove and $200 to have it moved to my house. That's all I can tell you.

If you put your email in your comment, you will get spammed. You have been warned ;)

Please keep in mind that I am not an appliance expert. I don't even come close. My only qualification is that I own a vintage stove.
All information posted on this page by me or any commenter is just an educated (and probably often enough, uneducated) guess.
If you are dealing with the inner workings of your stove, you need to verify all information with a qualified expert.
Period. End of story.

What Model Do You Have?

The model number of your stove can be found on the main panel in your right hand storage area.
Model Numbers